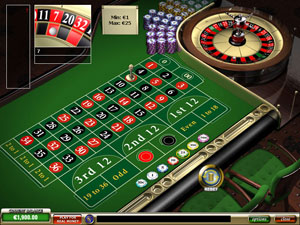 American Roulette came on the scene long after European Roulette had already been established.  European Roulette consists of a large 2-color wheel containing the numbers 0 to 36.  A ball is dropped and the wheel is spun.  Players can bet on the numbers or colors they think the ball will ultimately rest on.  The game is easy to play and requires no special skills and yet it’s not one that you can easily beat.  So it’s a bit odd that there would have been a need to create a different version of the game.  However that is exactly what happened with the introduction of American Roulette.

A Short History of European Roulette

Before we take a look at American Roulette, and how it differs from its European counterpart, let’s start by taking a closer look at European Roulette.  The wheel that is used for European Roulette was actually developed first in France.  For this reason, it is sometimes referred to as the French wheel.  European Roulette became extremely popular among European players.  Before long, news of this entertaining game spread overseas.  The European Roulette wheel contains slots numbered from 1 to 36 and has an additional slot for a 0.  The layout of these numbers is completely random and has no symmetry.  American casino operators did not care for the odds of this particular game as they didn’t favor the house over the player.  So, in order to increase their earnings with this game, they created the American Roulette wheel, which contains significant differences from the original European model.

Both versions of this widely popular game offer great entertainment value. But it is important to understand that these two games might sound the same, however there are major differences between the two.  These differences can greatly impact your chances of financial success.  So, the moral of this story is that when you want better odds at the roulette table, always stick with American Roulette!