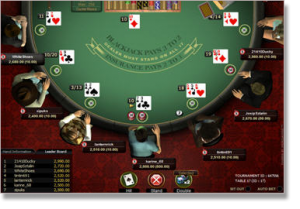 Online blackjack tournaments are a relatively new offering.  Blackjack itself can be traced back to 17th century Europe.  Since then, it has grown to such an extent that it is considered to be the most popular of all casino games worldwide.  Even the smallest gaming establishments will host at least one blackjack table.  Internet gambling has made the game even more accessible.

When entering an online blackjack tournament, you are given a predetermined amount of chips to use when playing.  The chips have no real value.  They are simply a means of tracking the tournament leaders.  At designated intervals the players with the most chips advance toward the final round, which usually consists of six players.  The player with the most chips at the end of an online blackjack tournament receives the biggest cash reward or prize.  Other finalists will usually receive cash or prizes as well; just smaller amounts.

Other versions of online blackjack tournaments, such as Elimination Blackjack, differ slightly.  In Elimination Blackjack, players that have the least amount of chips at the end of each round are eliminated. Consequently, the remaining players must adjust their playing strategy constantly.  Occasionally, players who are eliminated are able to buy their way back into the game.

Game Speed – Online blackjack tournaments operate at a faster pace than traditional blackjack tournaments.  The reason for this is that there are fewer distractions when playing online and the technology allows for a more rapid shuffling of the cards and automated betting.

Environment – Playing from home allows players to concentrate better when playing in online blackjack tournaments.  These players have complete control over their environment, whereas playing in a casino can be highly distracting. 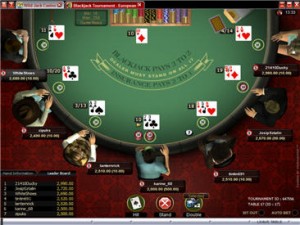 Thanks to the World Series of Poker (WSOP), most people are familiar with poker tournaments.  Many of the participants go on to become international poker stars.  But online casino tournaments are also very popular and come in a variety different flavors.  In addition to poker, you’ll also find blackjack, roulette, video poker, and the granddaddy of them all, slots tournaments.  Players find online casino tournaments so attractive because there are no special skills required in order to participate.  And, best of all, you can play from home.  The money you save on gas, food, and other expenses can be used on the games, giving you greater chances of winning.

Online casino slots tournaments offer minimal buy-ins and huge jackpots.  In many cases you are also given the opportunity to rebuy.  This means that even when you lose, you can still buy your way back into the game and qualify to win the prize pools.  Software giants such as Microgaming are renowned for offering all kinds of captivating and creative online casino tournaments.

Freerolls are a type of tournament that you’ll find at online and traditional brick-and-mortar casinos.  Sometimes these competitions are open to anyone, others require players to amass a predetermined number of points before they qualify for entry.

The biggest tournaments, like the WSOP, offer cash prizes in the millions.  They allow players to compete against the very best gamblers the world over and the champions often achieve a level of fame.  Unfortunately, they often come with substantial entry fees, which means they’re not usually accessible by the average player.  The only problem is that the buy-ins for these games are outrageous and totally unaffordable for your average player. This is where satellite tournaments come into play.

Satellites are online casino tournaments where the games feature a significantly lower buy-in.  There are no cash prizes offered, but if you win, you are given a discounted or a fully-funded entry free to a larger tournament.  Satellite tournaments are available for every major event.

A simple online search will help you locate a variety of online casino tournaments.  However, before you start playing, make sure that you’ve read the rules and regulations thoroughly.