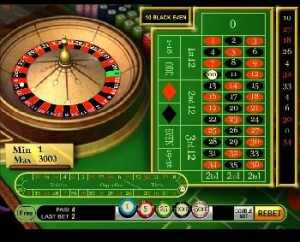 Usually there is more than just won winner.  Instead, the casino will post a leaderboard that tracks the wagering levels of the top players throughout the competition.  Often, at least five, and as many as ten players will qualify for prizes.  The leaderboards allow players to monitor their progress throughout the tournament, letting them know whether or not they will need to keep wagering in order to secure one of the top placements.

Benefits of Playing in Roulette Tournaments

Roulette tournaments do more than simply add more excitement.  They also give roulette players the opportunity to increase their odds of winning.  When playing many games, as you do when you participate in roulette tournaments, you not only benefit from a 97.3% payout (as you would expect in a game of European roulette), you also receive tournament winnings.  In total, this brings your return rate above 100%, which is a great way to “beat the house.”

Roulette tournaments also give players an opportunity to become part of a community.  When you register for the tournament you will choose a nickname that will be used for the leaderboard.  The more tournaments you play, the more familiar you will become with the other players at the table.  Online chat lets you communicate with these players throughout the tournament as well.  Through chat you can trash talk the other players and brag about your wins, but you can also use it to trade tips and ultimately form friendships.

How to Get Started Playing in Roulette Tournaments

Like slots and blackjack tournaments, participating in roulette tournaments is very easy.  If you are already registered at the casino you can just click on the opt-in button.  Then, play as many rounds as you can for the duration of the tournaments.  Check the leaderboard frequently to see how you’re stacking up against the competition.
If you haven’t tried playing in a roulette tournament before, it’s definitely something to consider.  They offer non-stop excitement, a great communal experience, and outstanding financial rewards!